Shortly after being diagnosed with me own type of Cancerous Scurvy, I began to hear reports of all sorts of other cancers. It shocked me to find that so many other people were experiencing it. I started hearing tails from me neighbors, fellow church members, workers, and relatives. Cancer knows no age, It has no bounds, it strikes the young babe to the Old Salt, It strikes with no regard to race, nationality or gender. This brings me to my second Sea Story about finding some genuine Treasure while sailin in these dark waters.

RAISING THE PINK FLAG: Out of the Pink, me crew received a signal one day askin if we would like to join in an adventure on the inland seas of the Indian River Lagoon. The crew that be doing the askin, told us of a plan to capture a major sailin ship, and hold it for ransom fer the cause.

TAKING SWIFT ACTION: Soon we were able to Strike an Accord with the other crew, setting us forth with the Black n Pink Flags unfurled, we quickly overcame the occupants of a very large 2 decker. Casting off all lines, we headed North to Cape Canaveral. Music, Singing and Feasting be the order of the day, 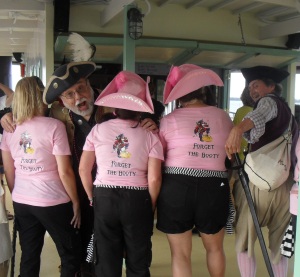 BUILDING A BOND OF FELLOWSHIP One of the major battles that we fight in this war on Cancer is the Battle for Breast Cancer. There be many other worthwhile battles to be fought, but on this day, our forces were joined with these Pink Scallywags of the fleet. We took on the “Battle of the Booty” and struck a mighty blow. Our demands for ransom were met, as we now look forward to continuing the fight, with other crews, in future days.

CAPT’n LOG: You do not have to fight the battle alone. There be many others who would gladly let ye come alongside them as ye fight together. Once again “X” marked the spot, and a great treasure was to be had.