AT SEA:  We have been underway now for quite some time. Each day is very much like the one proceeding it. Contrary to popular opinion, it is only on a very rare occasion that one sights a strange sail, and is then able to chase the scallywags down, boarding, plundering and reaping the excitement of mayhem. So as day follows day, boredom, depression, and anxiety become our fellow shipmates. 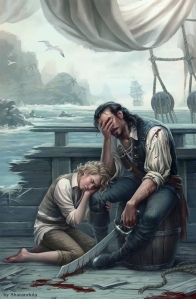 CAPT’N LOG: Getting the treatment takes 44 separate trips to Radiation. This is spread out over several months, as you have to go no less than twice a week, but no greater than 5 times a week. Along the way you begin to wonder if it is doing anything at all?  Friends; even though with well intentions keep asking how you are feeling?, as even they expect rapid results. It becomes a chore to constantly explain about the ill effects you are feeling, so you put on your brightest smile and say “All Is Well” sealing yourself off from allowing an outlet to talk about it. Depression  learks not far off, you are no longer fully healthy, and after all… Cancer is a Killer.   Then after reaching Mid Point, you begin to feel the side effects. New Medications are given to combat these, but guess what? Even these bring new side effects that must be faced.

LAND HO! Land is sighted, it be Christmas Island. Time to drop anchor, and do a wee

bit of repairs, allowing the crew to blow off some steam. New Planks are laid, Old Barnacles are cut off, and the crew begins preparing for a Grand Feast to celebrate the Christ Childs Birth. 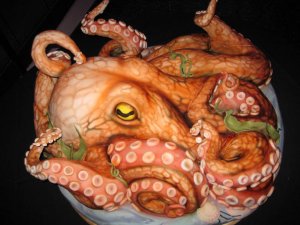 CAPT’N LOG: There comes a time in the journey where a choice must be made. Either sail on as before, or make a course change. Allowing the negative to hang on, will only make us slower, and lower in the water. New goals, and plans need to be set, Positive brought onboard to replace that which has gone Negative. But most importantly, being in one accord with all yer crew. If yer gonna get healthy, ya got to set your sights on that which lays ahead.

Authors Note: I realize this may be a bit darker post than my other blogs. But fighting Cancer is not a trip to Disney. Most shipmates will struggle with all kinds of effects as they go through their journey, so I have included some of mine. THE KEY is to set positive goals for the future, don’t remain surrounded by negative thoughts, or allow others to speak negative things to you. Instead call upon you family and shipmates for their support and love. and drink plenty of RUM…… CHEERS MY FRIENDS!, and have a Blessed New Year.